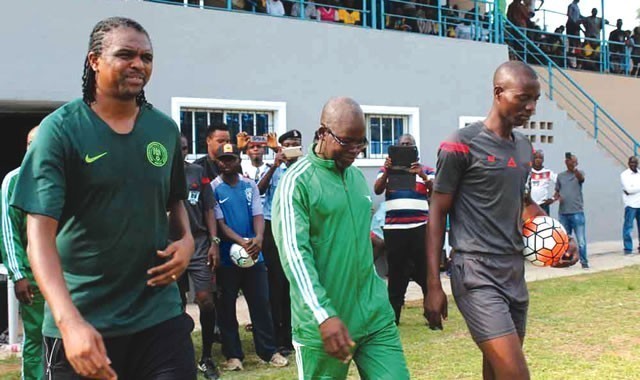 Papilo Football Academy was established in 2000. Owned by one of Nigeria’s greatest footballers, Nwankwo Kanu who played with Ajax, Inter Milan, Arsenal, and Portsmouth and has numerous medals to his name.

Nwankwo Kanu is a retired soccer player who played as a striker, a UNICEF ambassador, and the founder of Kanu Heart Foundation.

He is also one of the few players to have won the Premier League title, FA Cup, Champions League, UEFA Cup and an Olympic Gold Medal.

The African soccer legend started his career in Nigeria before moving to AFC Ajax in 1993, with 25 goals in 54 appearances.

In 1996, Kanu went to Inter Milan and also captained the Nigerian team that won gold at the Olympics the same year.

He scored two late goals in the semi-finals against powerhouses Brazil to upturn a 2–3 scoreline into a 4–3 win in extra time.

Kanu also won the African Footballer of the Year award for that year.

Back to the issue at hand.

Papilo football academy was set up to prepare young players and train them to become full-grown pro footballers just like the owner, who is a product of an academy too.

That was what inspired him to set up the academy so that raw talents can be discovered from different localities in Nigeria.

It is pleasing to note that since its inception, the academy has developed many players who have turned out to be national team players.

The academy has succeeded in transferring more than 10 players abroad. Famous names include Joel Obi of Inter Milan and Stanley Okoro of Battista, who is nicknamed ‘Little Messi.’

Others are Kelechi Iheanacho, Chidiebere Nwakali and a host of them.

Also, most of the academy players were used to form the main Papilo Football Club team.

The team in the space of three years got promoted to Nigeria National League (NNL) division.

Kanu used his connections to bring in top foreign coaches like Bryan Robson, Gary Smith and the likes, to train the students on short courses.

In 2018, roughly four players from Papilo football Academy were invited to Leeds United Football Club for training and the development is to be sustained for 2019.

The team will be playing in the Nationwide League One. They also obtained another partnership with Vandrezzer Oil Services.

The team has really met expectations and they plan to develop further, possibly to push the team to the premier league in the shortest time.

In terms of funding, Kanu has invested in excess of 100 million Naira since founding the club and they hope to complement his efforts by pushing the team further so that his purpose of starting both the academy and the football club will be actualised.

The academy has more than 200 players in Nwankwo Kanu’s private estate at Egbu Owerri road.

Papilo Academy football club is a platform for youngsters to hone their talents.

Kanu's words express what the academy stands for:

“We have a football academy, we also have a club all in one and for us, it is one way we hope to create a platform for youngsters to hone their talents,” Kanu hints Kanu Sports TV.

“We want to get these boys off the streets and provide an enabling environment for them to make a career for themselves and we’re happy this is yielding results if you check the number of youngsters who have made it from here to national u-17 and Flying Eagles, even in Europe,” he added.

There was a time Kanu launched N50m fund for Papilo FC.

Kanu, who was the proprietor of the Owerri-based team, according to a statement by the club, is determined to change the welfare and general condition of services of the players.

Kanu was reported to have sold the team over frustrations that teams don’t win based on their performance in the league.

Kanu channelled his finances then to his pet project, the Kanu Soccer Academy, which he adores.

Kanu Soccer Academy offers professional advanced football coaching for both boys and girls U6 to U17 Outfield players and Goalkeepers.

The team consists of ex-premiership player Kanu Nwankwo as their Player Development Director and highly experienced coaches, who are all FA and UEFA qualified, members of the FA Licenced Coaches Association, fully insured and clear criminal record checks.

Kanu Soccer Academy’s focus is on the development of individual players skills and techniques. With Kanu Nwankwo's two decades of playing professional soccer and his network in the world of soccer, each player will benefit from the opportunity to play and develop no matter the age and level.

There was a story then that Nwankwo Kanu claimed that Kelechi Iheanacho represented Papilo Academy before transferring to Manchester City and Taye Academy immediately cried out that it wasn’t correct.

And when Kanu’s elder brother, who is based in Owerri, was contacted, he refused to comment on reports that Iheanacho once played for Papilo Football Academy.

Papilo Football Academy 2019/2020 admission form is reportedly out. For information on purchase of the form and admission assistance contact the school admin Mr Godwin at Papilo football academy Owerri on 08144923594. Price is ₦12,500. For those who want to know how to register for Papilo football academy, calling the above number could be of great help.