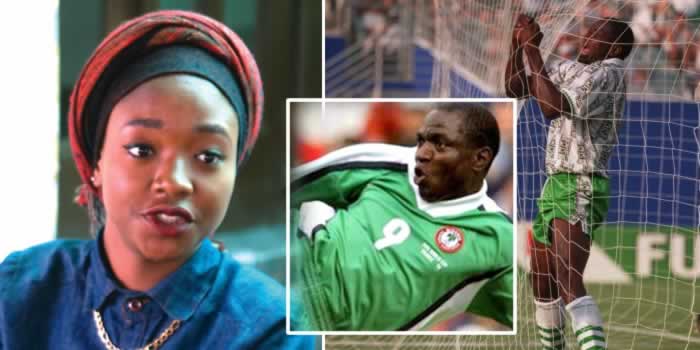 The untimely death of arguably Nigeria’s greatest striker Rashidi Yekini still remains a nightmare for all football fraternities in the world considering how the goal king died.

After retiring from football, Yekini was living alone in his mansion in Ibadan, Oyo state in which he isolated himself from all family members.

Omoyemi who is his daughter has described Yekini as someone of inestimable value who is worthy of emulation.

The 22-year-old graduate of English from the University of Ilorin stated this while speaking with Legit.ng in an exclusive interview stressing that her late dad was a religious person.

While speaking exclusively to Legit.ng, Omoyemi stated that she regretted the fact that she never had enough time with her father before he died due to his football commitments.

”I was 14 when I lost my father and it's still painful because he was someone of inestimable value and he was a person worthy of emulation.

”Although I was small when he died, but I will say that the little time I spent with him was considerably okay for me,”. Omoyemi explained.

There have been issues surrounding the death of late Rashidi Yekini in which his lawyer Jibril Mohammed claimed that his client was ‘murdered'.

But when asked to speak about her father's shocking demise, Omoyemi stated that she would not want to comment on that.

”I have no open comment on his death, but what I can say is that his name has opened way for me, and it has been great thanks to him and God,”. she explained.

Omoyemi hailed the Nigeria Football Federation (NFF) first vice president Seyi Akinwumi, saying he has been wonderful to her and mother ever since the year 2016.

She also mentioned Mutiu Adepoju as her father's only former Super Eagles teammate who checks on her and her mother on a regular basis.

On Monday, May 4, the world paid touching tributes to Yekini, eight years after his demise.