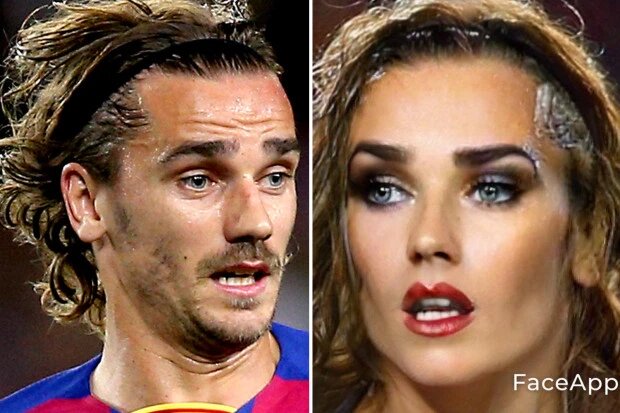 Have you ever wondered what Harry Kane, Cristiano Ronaldo, Lionel Messi, or even Franck Ribery would look like as women?

Well we decided to put their famous faces through FaceApp and got some hilarious results back.

His clean-cut looks work well as a man, but how do they translate put through FaceApp?

The England and Tottenham star is the model professional.

The Manchester City and England winger looks stunning as a lady!

If he dressed up as a lady, this could be a cunning disguise to leave quietly through the back door.

Something funny happens when you put him through FaceApp as a woman.

As a woman, like Messi, it's his cheekbones that win the day. And many ladies would die for those eyebrows.

There's a certain elegance to Maguire as a woman, just like how he brings the ball out of defence.

In fact, narrow your eyes slightly and you might just see a slight resemblance to Taylor Swift.

He's not called ‘The Special One' for nothing. As a lady, he certainly looks special to us.

Nice hair though. Eden Hazard could race a Real ribbing for his face swap on FaceApp.

What do you think of the PSG forward Kylian Mbappe as a lady?

FaceApp gives him red lipstick – fitting of his famous former employers, Bayern. And check out those eye lashes!

Lady Ronaldinho wouldn't look out of place at the Rio Carnival.

As a lady, you wouldn't want to come across him in a dark alley.

His dark, masculine looks have always won him admirers from female fans, and he's married to beautiful TV presenter Christine Bleakley. And as a woman, he's certainly glowing.

So, who is the prettiest or ugliest?!