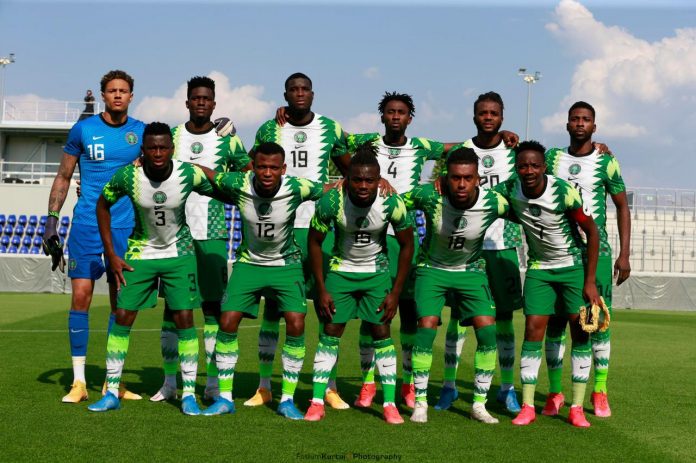 The Super Eagles are in Morocco ahead of their World Cup qualifier against Liberia.

The camp is bubbling amid the absence of Victor Osimhen, Odion Ighalo and John Noble.

The World Cup qualifiers is in the final stretch of the group stage matches, with the Super Eagles taking on Liberia in the matchday five fixture. It is a must-win fixture as anything less could jeopardize their Qatar chances.

Things might get dicey if Nigeria fails to beat Liberia and Cape Verde defeats the Central African Republic. In fact, Gernot Rohr has described the game as a ‘must-win' for his side.

Preparations are already in top gear to ensure that Nigeria secures a victory over Liberia in Morocco.

The Super Eagles manager has an almost full complement of personnel in Morocco ahead of their Saturday tie against Liberia. The trio Victor Osimhen, Odion Ighalo and Enyimba goalkeeper John Noble are still missing in camp.

John Noble is a late replacement for injured Francis Uzoho.

The players in camp are already preparing for the battle ahead in Morocco as they continued their training in the gym on Tuesday morning. They also stepped out onto the Grand Stade de Tanger turf that afternoon.

The team seems to be taking their workout easy as the Tuesday training was not too intense. Gernot Rohr seems to have taken cognizance that the trip from Europe may have a lot of the players fatigued.

Rohr is hopeful of having every invited player in camp by Wednesday, and he gave his opinions on the team’s preparations after their first feel of the stadium turf.

Rohr’s position on the team

Gernot Rohr is impressed with the state of the Grand Stade de Tanger pitch. He is also excited by the weather conditions in Morocco. He made this known when he spoke to the team’s Media Officer.

The game is on Saturday vs Liberia.

The Super Eagles manager told the Media officer Babafemi Raji that he had 21 players in the camp including, two goalkeepers. He said he was happy with the training despite the absence of three players. He expects the missing players to arrive in the team soon.

According to Rohr, the players were okay. He said there was a good feeling with the players. He said some of the players played two days ago, necessitating the coaching crew taking it easy to avoid injuries.

Rohr stressed that training has been going well as the team achieved some goals. The Super Eagles had shooting exercises, and Rohr was satisfied with the conditions in Morocco. Rohr expressed satisfaction with the way things were going.

He expects the team to be complete by the end of Wednesday and that everything will go according to plan on Saturday afternoon. The gaffer, however, has nothing to complain about currently.

The only loss suffered by the Super Eagles in the group stage is the 0-1 home loss to the Central African Republic. A win for Super Eagles and anything less for Cape Verde will see Nigeria qualify for the third round.