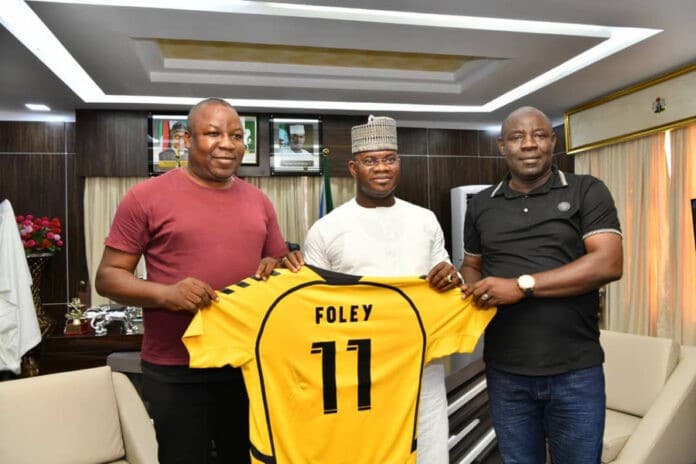 The mini unveiling ceremony was done at the Governor's office in Lokoja on Friday with key members of the club and other bigwigs of football administration in the state in attendance.

Recall that the former Udala FC boss was appointed appointed by Kogi United earlier in the week, hours after signing a two-year management deal with Abuja based Sports agency, Platini Sports Management.

Speaking at the ceremony, coach Foley was full of thanks for the governor for his support and the opportunity given to him to lead the team at this time.

“I want to use this medium to thank the Executive Governor of Kogi State, His Excellency Yahaya Adoza Bello for his support, also the CSO Alhaji Abdulmalik Sulaimon for the role he played and the Kogi United management board led by Alhaji Abdulmalik Issah Dolly for the trust and believe they have in giving me this job”

“It's a plus to have the executive governor of Kogi State unveil me today as the technical adviser of Kogi United, Confluence Queens and all state teams.”

Coach Afolabi who spoke to newsmen after the unveiling expressed his readiness to help Kogi United seal a qualification from the Nigerian National League to the Nigeria Professional Football League, noting that it's expedient for the club to be in the NPFL given that the Kogi based club has never competed in the league before.

“I am very happy to be reckoned with this state and its ambition, with a set goal of gaining promotion to the NPFL. We are going to work hard, put in our best and make sure we do everything humanly possible to get the NPFL ticket”, he said.

“One of the reasons why we have to do that is, Kogi United have never played in the NPFL before, so we are going to see how we can try to break that jinx and we also have a sport loving governor who is ready to do anything to support Kogi United”, he concluded.

Coach Foley will now replace coach Tunde Abdulrahman at Kogi United, with the hope of changing the club's fortunes when they finally get to play in the second tier this season.