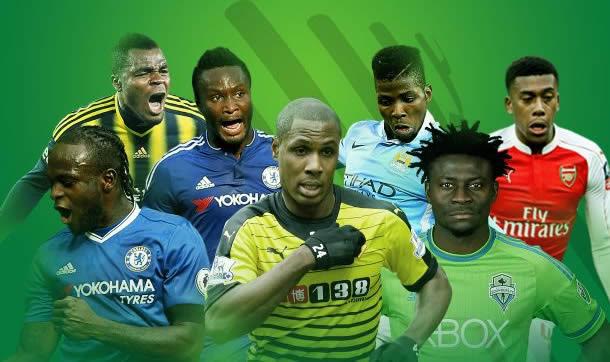 Do you know how many Nigerians are abroad playing football professionally? I do. If you believe that I do then you’d believe anything! The truth is, nobody really has a grasp of the list of Nigerian footballers playing abroad.

Many professional footballers play for foreign teams and also get called up to play for the Super Eagles of Nigeria.

So my list of Nigerian football players abroad will only focus on the most talented and promising Nigerian players abroad, the clubs they represent, and how many of them play in the English Premier League.

Even the Super Eagles players abroad are also on this list.

The English Premier League is one of the biggest soccer leagues in the world.

It has several football clubs that play seasonally beginning from August until May every year.

And just so you know, I'll also be listing the Nigerian players in English Premier League in this article.

Not just there, I'll also be listing the Nigerian footballers in Finland, Denmark, Germany, and so many other places you're not even thinking of.

The truth is that Nigerian players abroad play for different African, Asian, and European countries, including Portugal, Spain, Norway, South Africa, China, and so on.

Now let's go take a look at all the Nigerian footballers playing for other countries, and of course, the Nigerian players in England will be topping my list.

But before then, see top 10 nigerian eligible players who could play for the Super Eagles.

There you have it; a comprehensive list of Nigerian players and their clubs abroad.