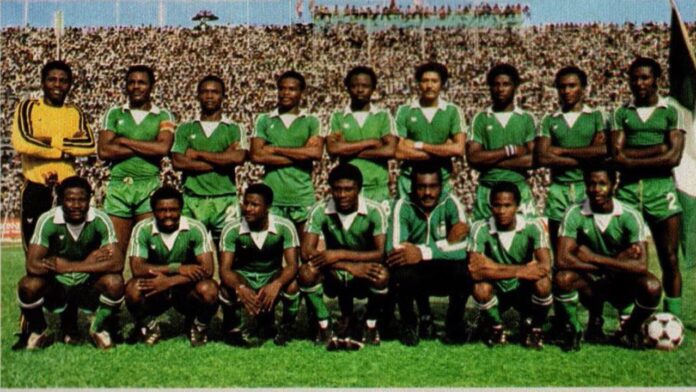 Who is Nigeria's greatest footballer of all time? Which Super Eagles players – from the past – can qualify as Nigerian Football Legends?

The truth is, the article will be subjective. The footballer I pick as my number one may differ from your choice.

And then again, the younger generation may not know anything, or much, about the players from old.

Christian is famously known for leading the Nigeria team that won the 1980 Africa Nations cup.

As a central defender, he easily dominated attackers and usually wrestle opponents off the ball with graceful ease.

He was popularly addressed as the chairman due to his defense and leadership qualities.

After retirement, Christian delved into other football-related activities and in 2003 was appointed coach of the Nigeria National team and held the position till the late part of 2005.

Best Ogendegbe, born in Sept. 1934, was one of Nigeria's best goalkeepers and the goalie that guided the country to its first continental trophy in 1976 while playing for shooting stars F.C.

Best was known for his charisma and cat-like reflexes during his playing days and single-handedly winning many games for both shooting stars, and the green eagles as the national team were called then.

He featured in the Summer Olympics at Moscow and pulled off some world-class saves as well.

After retirement, best delved into the coaching world and was the assistant head coach of dolphins F.C. from 2008 to 2009.

He remained in the coaching career until his death on Sept 28, 2009, after relapsing into a coma following eye surgery.

There can be no arguments about Stephen Keshi's inclusion in this Nigerian Football Legends list.

The Nigerian legend served his country as both player and coach and is the only Nigerian to have two Africa Nation Cup successes, the first coming in 1994 as a player and the second in 2013 as a coach.

Stephen Keshi was a well-balanced footballer who could easily out-tackle opposition players and win aerial duels during his playing days.

As a coach, he was fondly called the big boss due to his ability to outsmart other managers in tactics and strategies.

Apart from guiding Nigeria to the AFCON title, he ensured their qualification to the 2014 world cup.

Sadly, the big boss suffered a heart attack on Jun 7, 2016, and passed on not too long after.

Samuel Sochukwuma Okwaraji was a Nigerian great who, before his death, was one of the most talented players in the National team.

He was a very influential player with the national team and was a stand-out talent for the team that won the Africa cup of nations in 1988.

During the 77th minute of a world cup qualifying match against Angola on August 12, 1988, Samuel collapsed and was rushed to a nearby hospital, where he was pronounced dead.

While in Nigeria, he won the Challenge Cup 5 times out of 7 finals reached.

He played for Queens Park Rangers in the Football league and scored 3 times out of 13 appearances.

Balogun was nicknamed thunder due to his powerful shot and long-range goals.

After retiring, he went on to become a coach, making him Africa's first qualified professional football coach.

Usually shortened as Segun Odegbami is one of the top strikers to have worn the Eagles' shirt, having a better goal-to-game ratio when compared to other strikers.

Often called the mathematical because of his college days as an engineering student.

Odegbami was a very influential figure with the Nigeria team that won the 1980 Africa Cup of Nations.

He scored a total of 23 goals in 46 appearances registering a 0.50 average goal to game ratio.

He again reached the 1984 nation cup final but lost to Egypt, with the game becoming his last Cap for the super eagles.

Popularly known for his crazy and hilarious hairstyles, Taribo west is one of Nigeria's strongest players in terms of strength and fitness.

He was part of the Nigeria team that won Gold at the 1996 Olympics in Atlanta and also participated in the 1998 and 2002 world cup.

Taribo is known for being a powerful and physically commanding defender that won almost every ball he tackled.

While he was not the best with speed, his commitment to making runs and contribute to attacks made him indispensable with the Nigeria team.

He played for a lot of clubs, including AC Milan and Inter Milan.

When it comes to powerful strikes and unbelievable goals, Rashidi was definitely the man during the golden era of the Nigeria team.

He scored Nigeria's first-ever world cup goal in 1994 and was instrumental for the team's 1996 world cup qualifiers success.

A striker, Rashidi had a successful spell in his club career and played for Victoria Setubal in Portugal.

While many people feel Jay-Jay was not very ambitious and didn't use his talent to the fullest, the man did enjoy a successful career internationally.

He was part of the squad that won Gold at the 1996 Olympics and was a very influential figure in the team.

Best Known for his many tricks and dribbling skills, Okocha pretty much outclassed any player in the Africa continent internationally.

For his club career, Okocha stuck with mostly bottom and mid-table teams across different leagues.

Okocha has been influential in shaping a lot of players' careers, including Ronaldinho and Muller.

A lot of people see Kanu as the more ambitious version of Okocha and for good reasons.

He is the most decorated Nigeria player and was a very influential figure for both club and country.

Coming from the same crop of players as Jay-Jay, Kanu was one of Nigeria's talismans who was always at hand to produce magic for the team.

Kanu won Gold with the national team in the 1996 Atlanta Olympics.

At the club level, Kanu enjoyed a lot of successes with various clubs, including Arsenal, where he won the premier league title twice and was part of The Invincible in the 2003/2004 season.

Kanu is an icon in Nigeria football and is regarded by many as the best player the country has ever produced.

And now, it's your turn! You disagree or agree with my list of Nigerian Football Legends? Go ahead, make your case in the comment box.