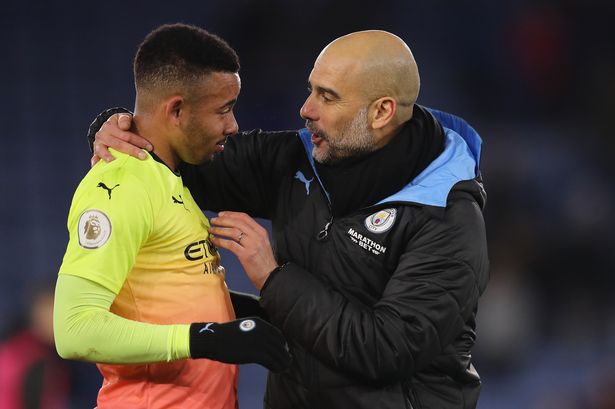 In just three appearances, Gabriel Jesus has shown he is ready to take on the responsibility of Sergio Aguero when the club legend eventually leaves City.

His rapid improvement over the last 12 months might even save City millions in the transfer market next summer.

With a goal or assist every 90 minutes since replacing an injured Aguero at half time of last season's Premier League home win over Burnley, Jesus has taken the creative responsibility in his strike partner's absence and guaranteed a return of goals to the team.

The team's struggles in front of goal when both were out only proves how much City have come to rely on Jesus when Aguero is not playing.

In pure goals to games ratio, Jesus is returning just under one goal every two appearances since the start of last season, and when assists are included, he plays a direct role in a goal every 1.4 games. In terms of minutes played, Jesus scores or assists every 86 minutes on the pitch since August 2019.

Aguero's record in the same time is only slightly better at a goal or assist every 81 minutes.

Jesus' 14 assists are just as impressive as his 26 goals in those 56 appearances, and account for just under half of his total assists for City – the first half were accumulated in 100 appearances.

A question mark still remains over how clinical he can be – just look at the missed header vs Liverpool – but his goals against Wolves, Olympiacos and Liverpool this season should be a reminder to any doubters that Jesus is as good as a like-for-like Aguero replacement as anyone in the world.

Those goals were eyecatching, and should serve as a reminder of Jesus' improvement to be as close to challenging Aguero's starting spot as he has ever been.

When Aguero leaves – potentially as early as this summer – City should have no hesitations over promoting Jesus to first-choice striker.

By showing he is capable of taking his chances, especially during a quiet performance, Jesus might have finally ticked off the final question mark over his ability.

In turn, Jesus might then save City millions when it comes to buying a replacement for Aguero.

They should now be confident enough to look for another promising ‘project' striker, like Jesus was in 2017, rather than being quoted club-record fees for a ready-made world-class Aguero replacement.