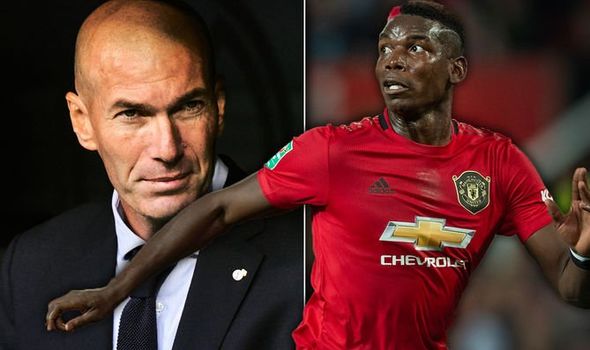 Real Madrid manager Zinedine Zidane has admitted he no longer is in transfer pursuit of Paul Pogba.

Pogba has long been a target for the Frenchman but United refused to cash in last summer.

Recent reports in Italy suggest the Manchester United midfielder is again engineering for a move either this month or at the end of the season with Juventus in prime position.

And Spanish journalist Eduardo Inda has now revealed Zidane has given up his chase for the 26-year-old due to Florentino Perez having the final say.

Real’s president calls the shots on transfer dealings and is not a fan of Pogba’s agent Mino Raiola.

“What they tell me is that Zidane, a little less, has thrown in the towel with Pogba,” Inda revealed.

“The president has never wanted to bring Paul because Raiola makes him nervous.”

While the Red Devils would not entertain offloading Pogba this month, reports in Germany claim they could cash in at the end of the summer but would demand a fee in the region of £150m.