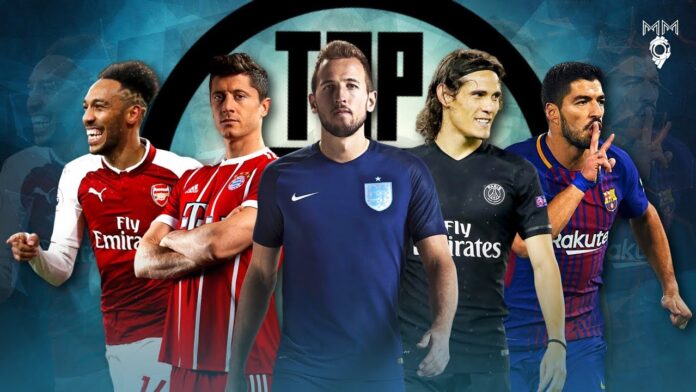 Who are the top 10 best strikers in the world right now? That's right, I know a lot of names are running through your head and, as you try to sift them, you still can't make up your mind on the subject matter.

Anyway, I have compiled and ranked who the top 10 best strikers in the world are in this article.

Let's go through them together.

Top 10 Best Strikers In The World

There is no doubt that Aubameyang's body language for Arsenal in the 2020/2021 season suggests a player who feels he deserved a better club for his talent.

The Gabon midfielder has been Arsenal's marksman for four years after joining the team in 2018. He has registered a total of 64 goals in 114 games for the Gunners.

Despite all of these downs, Aubemeyang's record as a clinical striker is not in doubt, with the Arsenal captain having registered over 200 goals in his career.

Lukaku has had both highs and lows, but one thing that has never been questioned is its coring ability.

Coming into limelight in Everton F.C, the Belgian was a consistent thorn against top English teams and at one time registered a hattrick against Manchester United in the 2012/2013 season.

Before joining Manchester United, he was signed to Chelsea, where he was the club's top scorer for all three seasons.

He scored a total of 42 goals for United before joining Inter Milan.

Lukaku engineered his Inter Milan team to the scudetto title for the 2020/2021 season with 24 goals making him the highest goal scorer for the season.

Jamie Vardy is one of the best strikers in EPL and has been a major force on the Leicester team.

During Leicester's 2015/2016 title-winning season, he had his best season, where he registered 24 goals and broke the record of consecutive goal-scoring matches after scoring in 11 games to break van Nistelrooy's record.

In addition, he won the premier league golden boot for the 2019 season after scoring 23 goals.

SEE ALSO | How To Join Manchester United Academy From Nigeria

Ciro Immobile has been an internet sensation since coming into the limelight with Lazio.

He was the forebearer of Lazio's midseason bid for the Serie A Title in 2019/2020, with Lazio missing out to Juventus in a final couple of games.

He scored 36 goals for the season averaging more goals per game and winning the highest goal scorer.

When Luiz Suarez was in the most euphemistic term, being offloaded by Barcelona as excess weight to Atletico Madrid, fans felt one of the most formidable striker ever to play the game was finished.

Suarez, however, came back with a bang, hitting 21 goals to engineer his team to the La Liga title.

Before his move to Atletico Madrid, Suarez has always been a force to reckon having scored over 500 goals for both club and country.

In addition, he has won the highest goal scorer for both Liverpool and Barcelona.

Since coming into the limelight, the Borussia Dortmund sensation has become one of the most in-demand strikers, with every club looking to place their hand on the red hot talent.

Haaland has the highest goal conversion rate on this list, with 49 goals in 52 games.

The major fuss about the Norwegian talent is the fact that he is only 19 but plays like a veteran.

While the young superstar is yet to achieve major successes, there is no doubt there is a bright future ahead.

Harry Kane is currently the English premier league top scorer and has held that title for over three consecutive years.

The Englishman, who is widely known for his predatory attacking style and link-up play, has proven to be a force to reckon with.

Harry Kane has won three premier league golden boot awards and is only one shy of equalling Thierry Henry's record of four.

He is the current holder of the award after winning it in the 2020 season with 23 goals which were his total goal for the season.

SEE ALSO | How Many Foreign Players Can Play In EPL

Benzema was at a time thought to be buried after the emergence and dominance of Cristiano Ronaldo as Madrid's main star.

While Benzema continued to register great scoring tally for a striker during those years, most of the media coverage was focused on Ronaldo.

Even after the departure of the Portuguese, more than a few critics and analysts believed the Frenchman would not turn up to the responsibility.

He, however, didn't take long for the predatory striker to silent naysayers and established himself as a prolific alternative.

In the 2020/2021 season, Benzema scored a total of 29 goals, with 23 coming from Laliga where he gave Lionel Messi, the eventual league top scorer, a run for his money.

Despite being left winger for most of his career, Cristiano Ronaldo has no doubt settled into the role of a marksman since sharing the position with Kareem Benzema during his Real Madrid days.

However, the 36-year-old Portuguese forward has not shown signs of slowing down despite his age and was able to register 39 goals for the 2020/2021 season.

A record that was only bettered by Barcelona ace Lionel Messi and Bayern Munich Robert Lewandowski.

Ronaldo is highly regarded by many as not just a seasoned striker but one of the best players in the world.

In a recent interview marking his 20th football anniversary, Ronaldo told fans that while he may not be able to give them another 20 years of playing, he would put out his best performances whenever he is opportune to play.

SEE ALSO | What is the Most Profitable Sports to Bet On In 2021?

Robert Lewandowski is number one on my top 10 best strikers in the world in 2021.

He has been on the top of his game for a long time and does not look to be slowing down anytime soon, with the 32-year-old Poland and Bayern Munich striker still finding the net more times than the number of games he has played this season.

Lewandoski holds the record for scoring the fastest number of consecutive goals in one match after hitting an outstanding 5 goals in 9 minutes against VFL Wolfsburg during the 2014/2015 season.

He won The FIFA men's best player award for the 2020 season and was a strong favorite to clinch the Balon d or whose award ceremony was canceled due to the coronavirus pandemic.

Lewandoski has scored a total of 49 goals this season and is still hopeful to add his tally in the ongoing Euro competition.

Those are arguably the top 10 best strikers in the world currently.