The FIFA World Cup has turned up the heat since its beginning. The football showpiece has served up great action as well as huge shocks and surprise team performances in the group stages. One of those teams that have brought the shock factor are the Black Stars of Ghana.

Their performances so far have been brilliant. With that in mind, Ghana World Cup odds will be well worth looking at as they continue their strong campaign.

Ghana to score in the 1st half

Over 2.5 goals to be scored in the match

After a 3-2 loss in the first match against Portugal, they bounced back with a 3-2 victory against South Korea. They put their first points on the board and kicked off the Black Stars World Cup campaign in what was an exhilarating contest.

Mohammed Salisu opened the scoring for Ghana and Mohammed Kudus added a second ten minutes after. In the second half, Ghana were pegged back due to two goals by Gue-Sung Cho. Mohammed Kudus once again came up with the goods and scored the winner for his country.

This result means that going into the third match, the fate of the Black Stars World Cup is in their hands. A tough and emotional meeting with Uruguay awaits them on Friday.

Uruguay will have all to play for when both teams meet on Friday. The South Americans have only managed to put one point on the board with no goals scored so far in Qatar. They will need to score their first goals at the tournament, beat Ghana and also hope Portugal beat South Korea.

Portugal may look to rotate their team since they have already qualified for the next round of the tournament. Regardless, they will still be favorites against South Korea but a win against Ghana will not be as straightforward.

Uruguay and Ghana have a famous history that dates back to the 2010 World Cup. Ghana looked like they were about to become the first African Nation to reach the Semi-Finals of the World Cup. However, we were served with one of the most iconic World Cup moments.

Luis Suarez intervened with a handball at the goal line. Asamoah Gyan missed the penalty that followed and then the Black Stars lost the match after a penalty shootout.

The Black Stars will know that they only need a draw in this match to advance. Though, the occasion and significance of the opponent in front of them will motivate them to go for victory instead. If Uruguay are to beat Ghana and qualify, they must be ready to go to war.

Who will win this fixture? 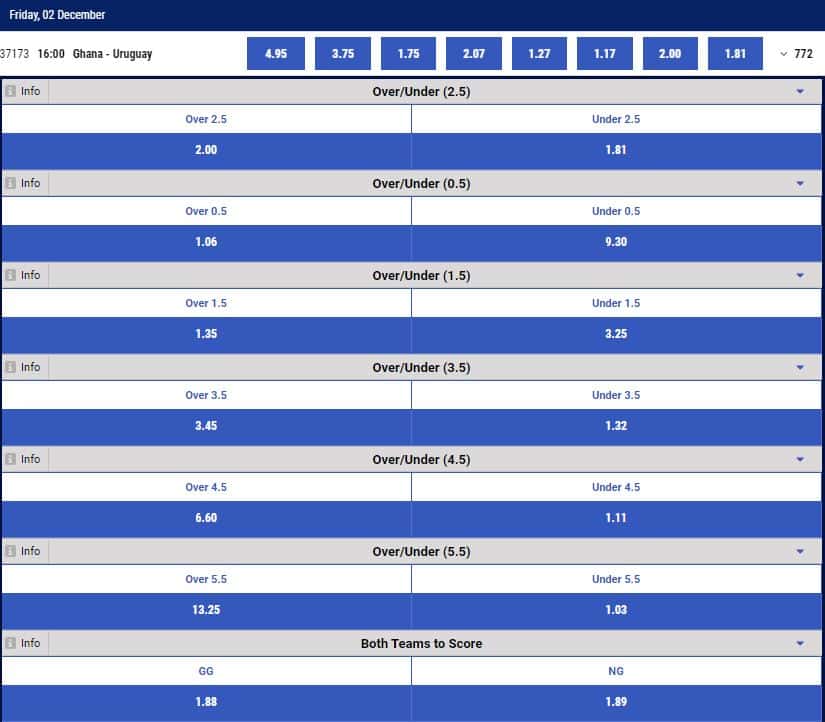 Uruguay are favorites to get a victory in this match with an odd of 1.73 while Ghana are underdogs with odds of 5.00. As the Black Stars have shown so far this tournament, they are not an easy team to beat. The Black Stars have all the momentum going to the game on Friday and will ride that wave to victory.

Let’s take a look at the other Ghana World Cup odds available for their match against Uruguay.

Ghana have been involved in two very high-scoring matches and have shown themselves to be vulnerable defensively as well as lethal going forward.

We have already picked them as the winners of this fixture but we also believe that the match will be one which will see multiple goals scored.

We went with the over 2.5 option which produced 2.00 odds because Uruguay will throw everything they have at the Black Stars and Ghana will respond in kind.

The Uruguayans are yet to score in this tournament but we will see an offensive explosion from Luis Suarez and co.

Ghana to score first in the first half – YES

This is another one of Ghana World Cup odds that you can add to your bets for the game against Uruguay.

Ghana have scored five goals already in the group stages and are the joint-highest goal scorers in the group along with Portugal. They will have the confidence in front of goal required in a big game like this. All things considered, they should likely be the ones to open the scoring in this match.

We already predicted that this will be a high-scoring game and with odds of 2.80, the Black Stars should be backed to score first.

If you want to bet even beyond the in-game odds, you can also check out some of the Ghana World Cup outright bets.

Ghana to Qualify for the round of 16

This match against Uruguay is one that could end in Ghana not qualifying for the last 16 even if they avoid defeat. The only way to secure qualification is for them to gain all three points against their South American opponents.

This is based on the other fixture. Portugal and South Korea face and there is a chance that the Europeans could rotate their side as mentioned earlier.

The Asian team will still be the underdogs in this fixture but squad rotation could cause a lack of rhythm in Portugal’s ranks. South Korea will try to take advantage and get a win.

You can see the latest BetKing odds on the Group H Top 2 below: 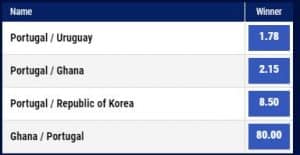 As you can see Betking believe it's a toss-up between Uruguay and Ghana for second place in the group, with Republic of Korea being clear outsiders. Do you believe the Black Stars can make it to second position? Place your bet at BetKing today!

Ghana to win the group

This could be seen as a bit of a risky bet to take but it is still a possibility. It is one of those Ghana World Cup outright bets that could fetch a huge payout. Portugal have already secured qualification to the knockout stages, meaning they may take their eye off the ball a bit.

If South Korea beat Portugal by more than one goal and Ghana are able to score three or more goals without reply against Uruguay, then the Black Stars will finish top of their group.

Ghana to win the World Cup

If you think the Black Stars can go all the way to the final in Qatar, current available odds are 350.00 at BetKing. They would need to navigate a tricky route to the final, potentially meeting World Cup favourites Brazil in the last 16. But anything is possible in football and Otto Addo's men will be looking to make history.

To find out more about BetKing and the odds they offer, check out our BetKing review.

This article was most recently revised and updated 3 mins ago