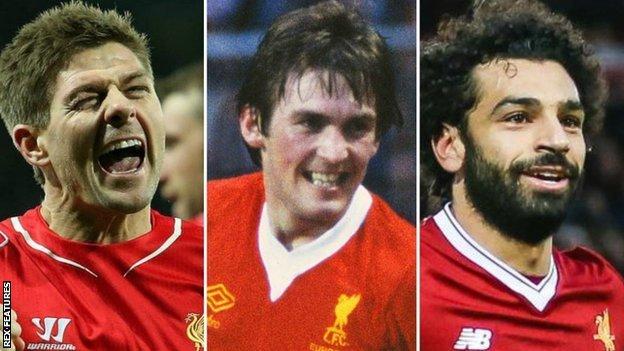 Ian Rush is no doubt number one Liverpool all time top scorers in the history of the club with the biggest margin of 61 goals from the second position occupier, Roger Hunt.

In this post, I am going to introduce and give a detailed description of three Liverpool all time goal scorers ever.

The list is not limited to these top three footballers, but they remain the best of the best in terms of their goal scoring records.

Arguably Liverpool’s greatest ever player; spent most of his career at Anfield. Gerrard joined the senior team in 1998 after spending nine years in the youth setup.

Steven Gerrard became captain of Liverpool in 2003 and charismatically led the club to the Champions League title in 2005, netting a goal in the final.

He remains the only player who has scored in the finals of the League Cup, FA Cup, UEFA Cup, and the Champions League.

He played for LA Galaxy until his retirement in 2016.

Liddell joined Liverpool in 1938 but did not make his official debut till 1946 as a result of the Second World War where he served in the Royal Air Force.

The versatile forward scored 228 goals for the Reds in 534 appearances.

Gordon Hodgson debuted for Liverpool in 1925 and played for the club till 1936, scoring 241 goals in 377 appearances.

After retiring from playing for Liverpool, Hodgson played for Aston Villa and Leeds United before retiring in 1939.

Hodgson played for two national teams, making one appearance in 1924 for South Africa – his country of birth – and played three matches for England.

Following his retirement, Hodgson became the manager for Port Vale from 1946 until his death from cancer in 1951.

During his time with the Reds, Hunt scored 286 goals in 492 appearances.

His League tally of 245 goals is yet to be bettered by any other Liverpool player.

Rush moved to Liverpool from Chester City in 1980 when he was a teenager.

He left Liverpool for Juventus in 1986 but his spell at Juve was not fruitful. He rejoined Liverpool in 1988 where he played till 1996.

Rush’s second spell at Liverpool wasn’t as successful as his first one but he helped the club win 5 titles including the 1989-90 League title.

He left Liverpool for the final time in 1996 and had short spells at a few clubs before hanging his boot in 2000.

Below are the other Liverpool leading goal scorers:

That’s how far I want to go on this list of Liverpool all time top scorers.

Including any player who has scored lesser than the least number of goals on this list would not really help this article.