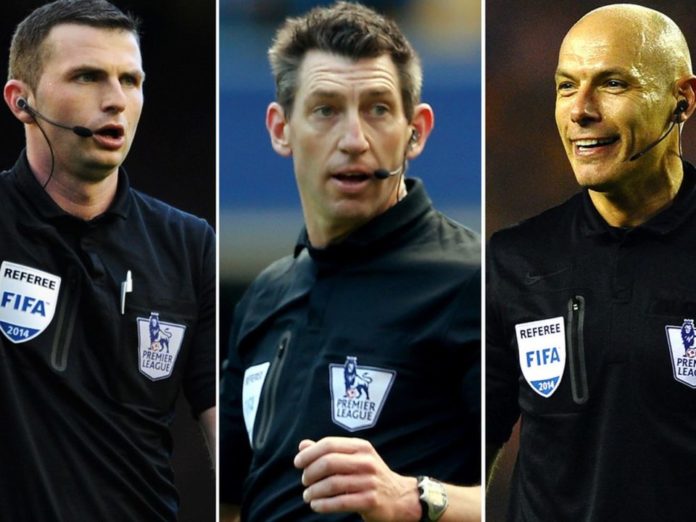 Yeah, one thing we know for sure is that Martin Atkinson will be the referee for Manchester United’s trip away match to Leicester City, while Paul Tierney will be the main man behind VAR, but who are the other Premier League Referees 2019/2020?

I compiled a list of all Premier League Referees 2019/2020, as well as their salary and a few stats about them too.

This season’s implementation of VAR – no doubt – has resulted in a lot of chaos.

There’s one thing we must all know though that it’s not an easy task.

Do we then remove the VARs and the referees?

Imagine this beautiful game called football without a referee. Enjoyable?

Referees make mistakes; they are only humans. The controversies they create kind of keep making football more fun to watch.

So how much do referees make in the EPL?

Did you know the highest paid referee in Premier League are Martin Atkinson, Michael Oliver and Mike Dean according to TSM Sports report?

Mike Dean referee salary? Martin Atkinson salary? And others too will be shown to you below.

But are Premier League Refs full-time?

Sure thing. But they only turned pro in June 2001.

Premier League referees are part of the ‘Select Group’ level category in English football, and are all appointed by the Professional Game Match Officials Limited (PGMOL).

Let’s now know how much do EPL referees get paid?

From the foregoing table, the question of how much does a Premier League referee earn has been answered.

Whereas in England referees are paid a basic annual retainer and then paid per match on top of that, the officials in the rest of Europe's top leagues are just paid on a game-by-game basis.