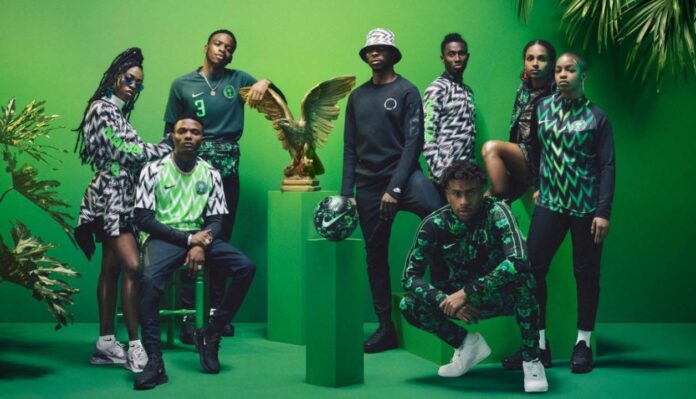 The Super Eagles World Cup jersey since Nigeria’s debut at USA ’94 tournament has come in various design, shades of green and even shape.

Some soccer jerseys have transcended national boundaries and become iconic regardless of whether the team donning them have – or will ever – taste success or not.

If a World Cup kit is that good, it becomes iconic! Simple and plain!

GoalBall takes a critical look at all Nigeria World Cup jerseys and how the designs have changed since 1994.

The Adidas Nigeria jersey of 1994 remains arguably the greatest – and is certainly the oldest and finest home shirts ever worn by the Super Eagles.

You’d think this is arguably the best jersey ever designed for Nigeria but unfortunately not.

I’m trying to do any form of rating of the Super Eagles World Cup jersey or something like that, but you just keep reading and you’ll see what I mean.

The white away kit, as worn by the Super Eagles 1994 squad at the World Cup, may be the more emblematic strip, but the home shirt is superb too.

The home shirt, while a little more subtle than the away strip, also caught the eyes of fans, as reference was made to local fabric around the neck and sleeves.

It was something the World Cup had not previously seen.

A truly distinctive Nigerian kit, and a worthy soccer uniform for Nigeria’s first team at the global stage.

Nigeria's kit in 1998 was a thing of beauty, as Nike adopted a retro look for the 1998 World Cup. The Super Eagles 1998 World Cup kit was a uniform that stood out for its simple and attractive design which saw the team sport a green shirt and shorts with a bold white stripe running from the sleeves of the shirt to the sides of the shorts.

The white bands with black trim on the shoulders and under the arms made the Eagles appear imposing and dynamic.

Nigeria’s 1998 squad where eventually knocked out shamefully by Denmark by four goals to one.

Nike’s effort at this shirt is rather divisive among supporters.

However, the jersey had the most unique shade of green the Super Eagles team has ever worn at the World Cup, and till this day, that shade of green has never been sported again by Nigeria.

Going lighter into a more mint green, the 2002 Nigeria World Cup squad wore a surprisingly new color on color effect with the unveiling of the Super Eagles' new shade of green.

Intriguingly, Nigeria used white numbers on their fluorescent green kit when they took on Argentina in 2002, but changed to black – for legibility purposes, or so they said – for the game against England.

Was it that Nigeria went there with Obioma (tailors)?

Nigeria’s kit at the 2010 mundial didn't leave much of an impression.

It was simply a boring effort, which lacked the style of previous shirts. It looked like something the chaps at Adidas took only 20 minutes to whip up.

Even the green lacked the vitality of Super Eagles' more classic kits, and this one, while dull, is simply unremarkable.

Ridiculed upon its unveiling, adidas nearly took us back to the kind of green we saw in 2002 ad that didn't go down well with punters.

Although, Adidas' white stripes on the shoulder had a classy touch.

To have sold 10 million shirts in 48 days? Even Nike couldn’t believe it!

It was a case of going back to your vomit. Only this time it was Nike and not adidas who had made the original design in 1994, the brand they started with.

From the contorted zig-zag prints to the incorporation of all the former uniform colors blended into one, Nike made the 2018 World Cup kits something Nigerians and people around the world can wear year in year out with pride.

The ‘feathery' design may be an acquired taste for some, while others have again complained that the shade isn't the right green for the Super Eagles.

However, this dazzling Nike design – part of a collection to celebrate the concept of Naija – has all the makings of an all-time classic World Cup jersey.

No doubt Nigerians are crazy when it comes to football jerseys, but not Super Eagles shirt! Never in history has this happened before.

What happened this time around? Why did Nigerians respond so swiftly like in this case?

Nigerians didn't respond this way in 1994 when Super Eagles won Africa nations cup for the second time and qualified for FIFA world cup for the first time – a squad adjudged the greatest Nigerian national team ever!

And to crown it all, the Super Eagles home kit was voted best jersey out of the 32 nations at the 2018 world cup in a poll conducted by Sky Sports, with the Nigerian jersey garnering over 40,000 votes to beat Germany to second place with 21,000 votes.

Unwittingly, Nike’s $90 retail price—more than most fans in Nigeria can afford—and its limited production boosted the value of fakes.

In concluding, it appears Nike released the most boring Nigeria kits in history and the same Nike were the ones who released the best jersey too that was worn at the 2018 World Cup.

Or what do you think?

Which one of the Super Eagles World Cup jersey is your favorite and which do you hate the most? You have the comment box to air your thoughts.

And by the way, if you’d like to buy Nigeria world cup kit you can head over to any online store like Jumia. I believe there you’ll find the current Nigeria jersey price.