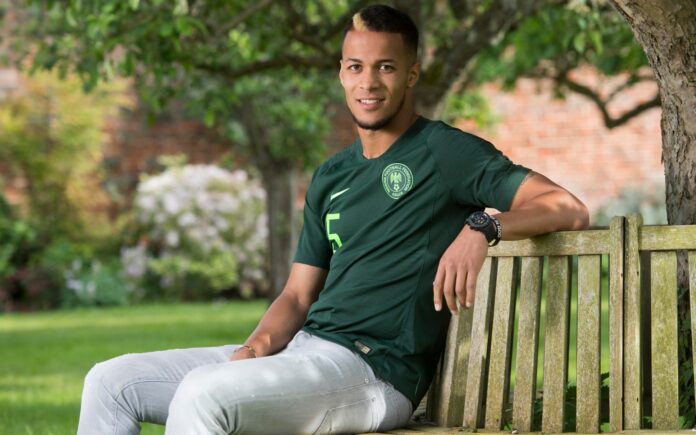 If it were the most handsome Super Eagles players article I was writing right now, William Paul Troost-Ekong would most probably have come out tops. But this is about his biography and profile.

Troost-Ekong was born on September 1, 1993, in Haarlem, the Netherlands, which puts his age currently at 27.

In his family, he has two siblings; one sister and one younger brother named Emily and Everest.

Yeah, he looks like some white boy but he’s totally not as his parents are a mixture of Dutch and Nigerian.

Alright, let me quickly explain that: his mother is the Dutch who goes by the name Eleanore Troost while his father is the Nigerian whose State of origin is Akwa Ibom.

See how he’s eligible for both Netherlands and Nigeria in international football?

Anyway, he opted to represent the Super Eagles of Nigeria as you already know.

Let me just say some things about his Super Eagles journey.

The half cast had already represented the Netherlands at the under-19 and under-20 youth levels before dumping them to represent Nigeria.

If you’re not a hater you’d give the dude a round of applause!

Ekong eventually made his debut for the Super Eagles on 13 June 2015 against Chad in an Africa Nations Cup (AFCON) qualifying match.

He also featured for in the 35-man provisional squad (Nigeria's under-23 team) for the Rio 2016 Summer Olympics.

After that, Troost made a World Cup appearance for Nigeria in Gernot Rohr’s 23-man squad in June for the Russia 2018 FIFA World Cup.

The Oyinbo was once again called upon in June 2019 to represent Nigeria for the Africa Cup of Nations. It was at this tournament that William scored an 89th-minute winner against South Africa to send the Super Eagles through to the semi-finals on the way to a third-place finish.

So it’s been so good so far for the defender who has a total of two goals for Nigeria in 45 appearances.

But how about the clubs Troost-Ekong played for before finding his way to the Nigeria national team?

Troost-Ekong’s senior career began in the Netherlands with FC Groningen and FC Dordrecht, but at youth level, he did that in England for Fulham and Tottenham Hotspur.

Afterward, he moved abroad and signed for Belgian club KAA Gent in July 2015 and was immediately loaned out to Norwegian club FK Haugesund.

Ekong only used about a year there before joining Italian Serie A club Udinese.

William Troost-Ekong current club is Watford. He signed for the EFL Championship side on September 29, 2020, on a five-year contract deal.

Ekong makes a good amount of salary from his career and has made a huge impact in the world of football.

His weekly salary at Udinese before joining The Hornets is €8k and gets £416,000 per annum.

Troost’s other sources of wealth and income come from advertisement and endorsement deals with Adidas, Nike, and TAG Heuer as brand Ambassador.

I’m not quite sure if he is still an ambassador for TAG Heuer who by the way is a watch brand trying to grow its business presence in Nigeria.

It is not known for sure if Troost-Ekong is married to the foreign lady whom he is seen with all over the place or they are just partners but they both have a little son together who is called Oscar.

Why do I say so? Take, for instance, he doesn’t ever reveal the name of his “wife” in public.

You’ll never find Troost-Ekong’s wife's name on the internet. You want to do the search and see for yourself? Be my guest and knock yourself out but I’m done with William Troost-Ekong profile.

Finally, Troost-Ekong has now tied the knot with his longtime girlfriend Molly, in a private ceremony in London.

The ceremony makes the relationship that has been ongoing for seven years official.