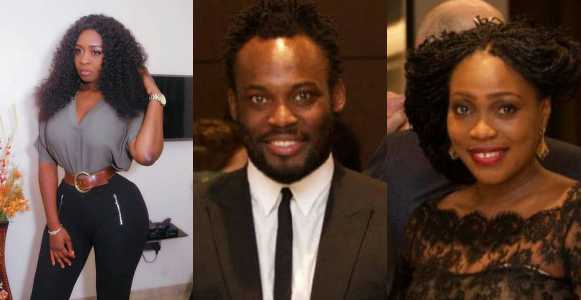 Would you like to know the names of Ghanaian footballers and their beautiful wives?

This is not going to be an attempt to compare these Ghanaian footballers and their wives even though my list has been arranged in order of top ten. It's just to make my article orderly.

So now let's meet my top 10 Ghanaian footballers and their wives of course.

Joseph Alfred Duncan is a Ghanaian midfielder who plays for Fiorentina.

In 2019, Alfred married his long-time girlfriend, Rhodaline Mortoliin, in a quiet ceremony that only had both couple families and few close friends in attendance.

A lot is not known about Rhodaline though Joseph uploads her pics on his social handle once in a while.

Harrison Afful is a Ghanaian footballer who plays for Columbus crew Sc.

He tied the knot with Roberta Harmah, a beautician based in the U.S, and they have a girl and a boy together.

Harry is very open with his married life and posts pictures of his kids and wife from time to time.

Abdul Rahman Baba is a young Ghanaian footballer who also plays for Chelsea.

While the youngster is yet to make a breakthrough with the club, he is actually doing quite well in his marital life.

Abdul has been married to Selma, his childhood girlfriend, since 2016, and the couple really looks to be having a great time together.

Abdul regularly post pictures of himself and Tamale on his social handles.

Mubarak Wakaso is one of the Ghanaian players who is happily married.

The Jiangsu Suning player and his wife Nabuzzo Wakaso have been married since 2015, and they have five children to grace their union.

Mubarak seems quite private with his family and hardly posts them on his social media handles.

John Boye is the captain of Metz football club and an active player with the Ghanaian National team.

Apart from football, john has a happy family and has been married to Soraya Boye for a while now.

John and Soraya first met and started a relationship during the player time in France.

They currently have two kids together, and john shares pictures once or twice a week.

Kwadwo Asamoah is an Italian-based footballer who plays for the Ghana National team.

He is married to Abena Asamoah, and the couple has been together since 2012.

They have two children Jason and Jada, and the whole family is based in Turin, Italy.

Abena graduated from the University of Ghana with an MBA in Entrepreneurial Management and has been very supportive of her husband's career.

Kwadwo found himself in a scandal in 2019 when an Instagram model Ohemaa Glory accused him of wanting an affair with her.

This caused a temporary hitch with his wife, but clearly, the couple was able to sort out the issue and are still together to date.

Though he may not be a consistent name for Leicester, Daniel Amartey is undoubtedly a celebrated figure with the Ghanaian national team.

Daniel is married to Ghanaian native Naa Shika, and the couple has been waxing strong together for years.

The couple whose union is in the seventh year seems to prefer a low profile as they barely share pictures of themselves or kids online.

Crystal Palace's Jordan Ayew is a well-known Ghanaian footballer and one of the team's most successful players currently.

Jordan tries to keep his life private and barely puts out any information about his personal life or family online.

However, one thing that is known is that he is married to Denise Ayew, and they have a boy and a girl together.

In 2015 a leaked audiotape revealed that Jordan was allegedly having an affair with Ghanaian teammate Afriyie Acquaah’s wife.

The lady, identified as Amanda, claimed they had been having an affair for four years.

The tape almost destroyed Jordan's home, so it is nothing short of a miracle that the couple is still together.

Andre Morgan Ayew is the current captain of the Ghana National team and is a forward for Swansea City.

He is married to Yvonne Ayew, and the couple has been together for years.

They have two daughters together and seem to be leading a happy life.

Andre is pretty strict with how much information about his family is available to the public.

He, however, put out videos of himself with his daughters having a good time, but this only happens once in a while.

Christian Atsu is one of Ghana most popular active footballers and is a prominent figure with the team he plays for in the English championship side, Newcastle United as a winger.

Atsu is married to Marie Claire, a German blonde, and the couple has two sons together.

Christian usually posts pictures of himself and his wife together having a nice time with their kids.

Those are my top 10 Ghanaian footballers and their wives.

And of course, judging whose wife is the most beautiful is not something I could stop you guys from doing in the comment box.