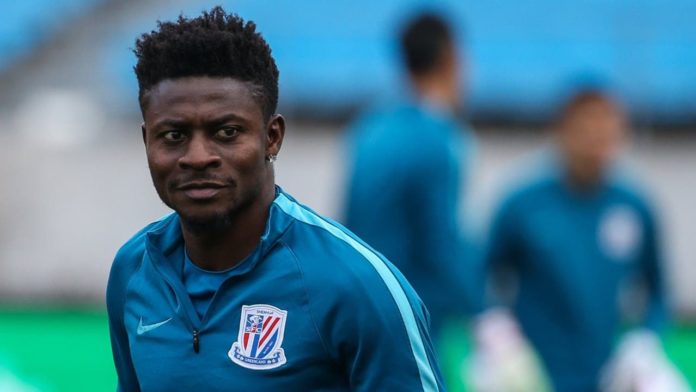 Just like the book by Chinua Achebe “there was a country” … there was a Super Eagles striker and his name is Obafemi Akinwunmi Martins.

Funny enough, even though he’s retired playing for the Nigerian national team in 2015 after 10 solid years with the Super eagles with 19 goals in 40 caps, Obagoal – as he’s fondly called – still plays n the Chinese Super League for Wuhan Zall at the age of 36.

The journey from when he started his football career to how he got to that Chinese club is a long one, all of which I will share with you in this Obafemi Martins biography.

Sadly, his elder brother who played for Reggiana, Partizan and Innsbruck before retiring from football in 2009 due to heart problems, died of a suspected heart attack in Lagos on August 8th 2011.

It was Sunday Oliseh’s father, Churchill Oliseh, who scouted him on the streets.

He broke into the international scene and made his senior career in 2002 when he signed for Serie A club Inter Milan youth team in 2001 for a €750,000 transfer fee.

It was his form for the youth side that led to his first-team league debut the following season.

Hence, Obagoal got his breakthrough.

After that, Obafemi moved to Premier League club Newcastle United in 2006, and then to Bundesliga club VfL Wolfsburg in 2009.

Having joined Russian Premier League side, Rubin Kazan, in July 2010, the was loaned to Birmingham City in January 2011.

Martins moved to Levante on a free transfer in September 2012, where he signed a two-year contract.

And in March 2013, Obafemi signed with MLS club Seattle Sounders FC as a Designated Player after the club paid a $4 million buyout clause in Martins' contract with Levante.

Chinese Super League side Shanghai Shenhua then signed him in February 2016.

Unfortunately, Martins suffered a torn hamstring in May 2019, and in November 2019 after his recovery, he started looking for a new club.

However, Martins returned to Shanghai Shenhua on July 15th 2020.

His second spell didn’t last long as he joined Chinese Super League club Wuhan Zall on September 21st 2020 on a one-year deal after his Shanghai Shenhua contract was terminated.

Martins made his debut for Nigeria in 2004 at the age of 19 in the 2004 tri-nations Unity Cup tournament in London.

He was a part of the Nigerian team that finished third in the 2006 African Cup of Nations.

Martins got into age controversy when in August 2006, the Nigerian Football Association (NFA) AKA Nigeria Football Federation (NFF) published his date of birth as 1st May 1978 on their website, which would have made him 28 years of age rather than 21.

The NFF however apologized and called it an administrative error.

Regardless, Martins was furious and failed to turn up for national team assignments, claiming his absence was due to his sick mother.

However, he made his return to the national side and captained the Super Eagles for the first time, in a friendly match against Australia for his 19th appearance.

Nigeria exited the tournament with only one point.

Martins is married to the sister of Mario Balotelli, Abigail Barwuah.

The Ghanaian-Italian have one child for Martins named Kendrick whom they gave birth to in 2013.

Their love story began in 2012 in Milan, Italy when Obafemi was head over heels in love with Abigail and both got into a relationship.

Abigail Barwuah was actually one of Obafemi's baby mamas before she and Martin tied the knot secretly.

Let me reel out the three different baby mamas who have kids for Obafemi: You already know Abigail who gave birth to Kendrick on October 16 in Italy.

The other one's name is unknown but they met during his visit to the UK. The white girl is the girlfriend who gave birth to Obafemi’s second son, Tyler.

And Obafemi’s third baby mama was an African girl he dated when he was playing in Italy.

She was the one who gave birth to Itunuoluwa A.K.A Kelvin.

His elder son Kevin Maussi Martins, who was born January 31st 2005, followed his father's footsteps and currently plays for Inter Milan's youth setup after Moving from AC Milan academy in 2018.

The 15 years old wonderkid has pledged his patriotism to the Italian National team after featuring for them on the Youth level.

Maussi Martins made his debut for Italy U-15 on November 22, 2019, and has since played 3 matches for the young Nerazzurri, scoring once.

Hopefully, Obafemi Martins son would switch allegiance and the young and energetic forward would don the Super Eagles jersey someday just like his father.

He has an estimated net worth of about $35,000,000 (₦12.6 billion). He has a number of endorsements, projects and investments here in Nigeria ranging from Real Estate to companies to entertainment.

The former Nigerian striker bought himself a new mansion in the VGC area of Lagos in 2018 which he posted to his Instagram back then. The magnificent crib is said to have cost Martins half a billion Naira.

His other house is located in Como, Italy and it is worth about ₦800 million.

What would you expect from one of the highest-paid footballers that ever came out from Nigeria when it comes to cars?! Nothing but the best, right?

Obafemi did not disappoint as he has a fleet of the best cars in his garage and you can see some of his luxury car collection below:

The Bentley comes with a 6L dual-turbo W-12 engine which has a top speed of 187 mph and accelerates from 0-60 mph in just 4secs.

Martins' Mercedes Benz SLR McLaren cost as much as $964,521 and appears to be his most expensive automobile.

Obafemi Martins owns a Lamborghini – and it is an Aventador which cost him about $417, 346.

Obafemi Martins G-Wagon stands at about $295,000 (depending on the package included) and it comes with a 4.0 Liter V8 engine that supplies as much as 577 hp using its 9-speed automatic transmission.

This 2019 Ferrari 488 Spider is Obafemi's latest addition to his garage which has an estimated cost of well over ₦ 110 million.

Can you believe that?! The dude is got a yacht of his own … an Iguana 31 Expedition Luxury Yacht which is valued at over ₦170 Million. What more can I tell you?

Obafemi Martins salary in China when he played in the Chinese Super League for Shangai Greenland Shenhua was $175k a week which makes his annual wages $6.6 million. He was among the top 20 highest-paid players in the CSL in 2017.

Also, the ex-Nigeria International, who got $2.4M annual pay playing for Seattle Sounders, was the highest-paid African footballer in the American Major league Soccer (MLS).

According to a report released by the MLS Players Union,  Martins earned more than Didier Drogba who was being paid $1,666,668 at the Canadian side Montreal Impact.