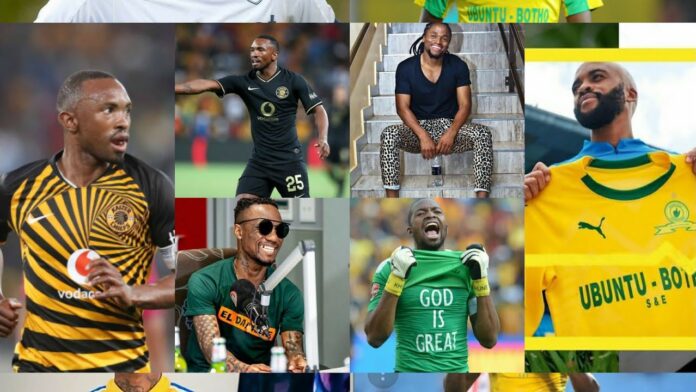 What did you think, that there are no well-paid players in South Africa? Sorry to disappoint you as I’m about to reel out to you who the top 10 richest South African footballers are.

Before I go on with the highest-paid soccer player in South Africa, do you know who the richest footballers are in Nigeria? See them here.

So, who is the richest player in South Africa for the year 2021? See them below.

Born July 22, 1993, Thembinkosi Lorch is a professional footballer who plays as a striker for south Africa powerhouse Orlando Pirates and the South Africa senior national team.

Themba Zwane is a professional South African player who plays with local League side Mamelodi Sundowns as an attacking midfielder.

Innocent Imaela is a left-back player for local league side Orlando Pirates and the South Africa national team.

He is one of the wealthiest South African players with a net worth estimated at $680,000 and a $1.2 million market value.

Khuneis a south Africa Goalkeeper who plays for Kaizer Chiefs in the south Africa Premier Soccer League. He is also the first choice goalie of the Bafana Bafana.

Itumeleng shot to fame when he saved three penalties against Mamelodi Sundowns in the Telkom Knockout final on December 1 2007.

Luther Singh is a professional South African who plays as a striker Portuguese side, F.C. Paços de Ferreira.

His net worth is estimated at $2 million, while he is valued at $2.50 million.

Starting his career on local soil, Percy was a recipient of many awards before moving to foreign soil.

His net worth is estimated at $2million with a Market value of $5.4 million.

Since his debut, Dean has been a regular face in the South Africa team. He currently plays as a midfielder for League Two side Carlisle United.

He is one of the wealthiest active South African players with an estimated network of $3 million and a transfer value of $634,950.

Mokotjo first came to prominence when he played for Dutch side F.C. Twente. He presently plays with F.C. Cincinnati as a defensive midfielder.

With an estimated net worth of $3 million and a $1.4 million market value, he is one of the wealthiest and most valued South African players.

An active member of the South Africa national team, Bongani Zungu, 28, plays as a midfielder for the national team.

He also plays for Scottish club Rangers F.C on loan from Ligue 1 side Amiens.

The richest South African on this list, his net worth is valued At $4 million while commanding a market value of $1.45 million.

You know who the top 10 richest South African footballers are now, right?